Did we mention we love trains? Japan has some of the finest in the world, and with the Japan Rail Pass almost all of them are yours. Here’s what you need to know.

By the way: This post is part of a series on travel to Japan

Taking the train from Tokyo to Kyoto for the first time is a revelation: You make your way through the busy maze that is Tokyo Station and go up to the Shinkansen platform, where the sleek bullet trains are departing in ten-minute intervals.

As Tokyo is the last stop on the line, you can watch how it is turned around for the journey back: A small army of pink-uniformed cleaning staff will take position a the platform. Once the train arrives, the will swoop in and go through each of the sixteen cars with choreographed efficiency.

Every seat is turned around to face in the direction of travel, armrests are swiped, trash cans emptied. It only takes ten minutes, and then you’re invited to board.

Once you take your assigned seat, you realize that you get more legroom than in most European first class carriages. You can recline without annoying the person behind you.

Within less than an hour, you’ll be passing by Mount Fuji. In less than two and a half, you’re pulling into Kyoto station.

When we first came to Japan, we didn’t know much other than that the shinkansen exists, and Ingrid really wanted to ride it.

We decided to go to Kyoto and went to Tokyo station to check for tickets: The full fare came out at over ¥25,000 (€200) per person, round-trip. There are some ways to get discounts on single tickets, but usually not more than around 10%.

The Rail Pass is valid for 7, 14 or 21 consecutive days. Once you activate the pass the clock is ticking; so don't activate it before you need to.

For us, the Rail Pass became an indispensable part of travel in Japan. We always get one, unless we travel to places where the rail network is sparse or non-existent, like Okinawa or rural Hokkaido.

The Japan Rail Pass is an idea of the JR Group, the successor of the long-defunct national railway of Japan. It is valid on all JR routes, including the shinkansen, with only a few exceptions and also works on a few JR-run busses and ferries.

After trying around a bit, we now buy our passes from Japan Experience. They usually ship within a day or two via FedEx and include some useful goodies like a map and a small guidebook.

We usually only have a rough idea where to go and make up our schedule on the fly once we’re in Japan.

You're meant to buy the Rail Pass in your home country before you leave. JR is now selling the passes in Japan on a "trial basis", but it's 10-15% more expensive than buying at home.

When you buy a Rail Pass, you’ll receive a voucher (“exchange order”) that cannot be used for travel directly. You have to exchange that voucher for the “real” pass at any larger JR station and most international airports.

You’ll have to fill out a small form, and they’ll check you passport to make sure that you’re actually on a tourist visa. You’ll also be asked to set the “start date” (the first day on which the pass is valid).

The process is easy: You show your exchange order and passport, and fill out a small form. You’ll also have to set the date on which the pass becomes active. You can activate it for the same day, or select a future date. You cannot change the activation date afterwards, though.

We usually don’t exchange the pass until we actually intend to use it or make our first reservation; this gives us maximum flexibility.

When we activated our first Rail Pass, we thought we’d just make a quick trip to Kyoto, maybe on to Hiroshima and just look around a bit. We went to Tokyo station, proudly showed our Rail Passes to the attendants at the ticket gates, and made our way up to the shinkansen platform.

When we settled into our seats, there was a poster in front of us advertising the beauties of Kagoshima – the southernmost tip of mainland Japan. That’s when it hit us: We could be there today, or the next day, in a few hours, just by choosing to get on the train. And we did.

The Hyperdia website is the one and only online timetable for Rail Pass users. It has an English interface and knows the timetables and fares for all trains, JR and private, from shinkansen to local services, and even some flights.

The site is fairly straightforward to use. If you have a Japan Rail Pass, make the following settings:

Hyperdia has fairly usable mobile site by now, and there’s also an app, which is only available in select countries.

When we were in Japan last winter, we wanted to take the train from Kanazawa on the north-west coast and go to Takayama in the Japanese Alps. We had been to the ticket office in Kanazawa the night before and picked up our reservations.

When we got to the platform in the morning, we noticed that the far end was jam-packed: That was the place where the “unreserved cars” would stop, and there was a lot of tourists (Rail Pass users, most likely) who just showed up and hoped to get lucky.

Our “reserved” end of the platform, though, was mostly empty. We queued in the designated spot with two Japanese families; when we boarded our car it was more than half empty.

Passing through the snow. Photo: Ingrid

In our “reserved” car to Takayama, there was plenty of space for our bags and we could freely move about and take pictures of the snow-covered winter landscape that was passing by outside.

Reservations are free for Rail Pass holders, and you can make one from one month in advance more or less up to the departure of the train. You just have to go to the nearest ticket center (midori no madoguchi), show your Rail Pass, and ask for one.

Agents will speak enough basic English to make the reservation, but you can also show the Hyperdia timetable if you want a specific train. If you look western and have a Rail Pass, they’ll also print the reservation tickets in English.

You reservation will show the seat and car number; the car numbers are indicated on the platform so that you know where to get on – Japanese railway cars will always stop in their designated position.

If you don’t know what to do: Just show your reservation to a member of staff, and they’ll direct you to the right place.

JR East has an online seat reservation tool. Ignore it unless you really want to reserve a very specific train prior to getting to Japan. Otherwise it is pretty useless: You have to go through a complicated form and you still have to pick up the reservation at a specific ticket center a day in advance. If you don't there's a cancellation fee.

In Japanese stations we often see tourists pushing around multiple oversized suitcases – per person. We’re not entirely sure sure what they have in there, but riding the train with them will be bothersome at best.

Japanese trains don’t have much space for luggage: The idea is that you only have carry-on-sized luggage on you. We usually travel light, so this doesn’t bother us.

But if you’re the type who cannot leave home without a full wardrobe, consider doing what the Japanese do and use a delivery service for your luggage. Yamato Transport is the market leader for this “Takkyubin” service, and most hotels should be able to help you make arrangements.

From June 2020, shinkanse on JR Central, West and Kyushu will require a reservation for “oversized luggage”; or make you pay a feed of ¥1.000 if you don’t have one. “Oversized” means that the sum of the measurements (width+height+length) is more than 160cm. This is still somewhat more most airlines allow for hand luggage, but will exclude most suitcases that don’t fit into the overhead racks. The number of seats for oversized luggage is somewhat limited, so reserve early – or travel light.

Ekiben (literally “train station bento”) is one of the best things about train travel in Japan. With ever-shorter travel times dining cars have gradually disappeared, but thanks to the bento box dining on a train is still very much a thing. 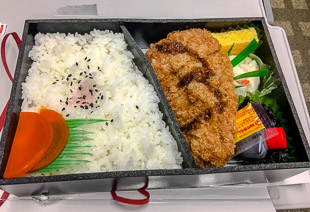 Bento on the train. Photo: Ingrid

There’s also a cart service with a selection of bentos and beverages on most trains; though the selection is much more limited than at a station.

On the way to Sapporo. Photo: Ingrid

While the bullet train experience is great, they don’t offer the most scenic views. Fortunately, there are a lot of great rides on Japan’s “standard” narrow-gauge railways. Here are some we tried:

There are many types of trains (Kyoto Railway Museum). Photo: Daniel

When we’re in Japan the next time, we’ll probably try out one of the “Joyful Trains”. These are touristic services, where the journey itself is the main attraction.

Those trains often feature special cars with panoramic windows, lounges, tatami seating, artwork and other extras – there’s even a shinkansen with an onboard onsen. Many also offer bento boxes with regional specialties.

Most of the “Joyful Trains” run on a regular or semi-regular schedule. As you can’t really search for those in Hyperdia, you’ll need to search the JR websites for the timetables.

The Japan Rail Pass is valid on “Joyful Trains” that are regular services. It doesn’t cover chartered and “cruise” trains which are only sold through travel agents.

For luxury trains like the Seven Stars in Kyushu you’ll even have to enter a lottery before you’re allowed to spend several thousand euros (or dollars) on a train trip.

The Sunrise Seto/Sunrise Izumo is the last remaining night train after the night services between Ueno and Sapporo were cut in early 2016 when the Hokkaido shinkansen went operational.

We haven’t tried this one yet - the train can book out early, and making reservations in advance from outside Japan isn’t that easy; though a specialized travel agent may be able to help.

Prices and conversions to Euro are of March 2019.