A busy day in the Markthalle. Photo: Daniel

Markthalle Neun is one of the most famous places in Berlin’s food scene, but in some ways its success is a mixed blessing.

Many beloved culinary institutions trace their roots back to the Markthalle in one way or another, but the fame also means crowds of foreign visitors that start to outnumber the locals.

Markthalle Neun is one of originally fourteen market halls that the government of Berlin built in the late 19th century. The halls were intended to provide a more hygenic and better organised alternative to open-air markets.

It was one of the very few to survive the war, and while initially successful was pretty much run down by the turn of the millennium.

While there was talk of selling it to the highest bidder, and potential demolition, it was taken over by a “project group” after much campaigning by local initiatives. It reopened in 2012 as a mix of farmer’s market, food stalls and culinary experiments.

Rebirth as a culinary playground

The new concept fit equally well with Kreuzberg’s counter-culture image and the ongoing gentrification of the surrounding areas.

Markthalle Neun became an experimental lab for new culinary ideas: Some – like kame japanese bakery – trace back to temporary stalls in the Markthalle, some established themselves there permanently like butchers Kumpel und Keule or bakery Sironi. Others were inspired by the produce and ingredients that became available here. 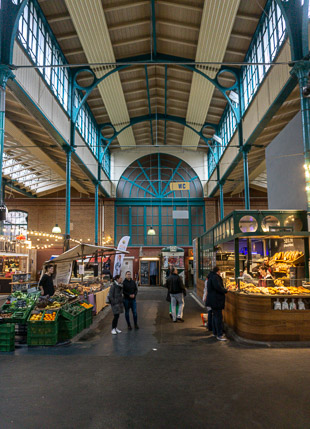 The picturesque location and abundance of food options also made the place a visitor magnet and it is now a must-go for every foodie with a Lonely Planet guide. You can still have breakfast on Saturdays or visit the Street Food Thursday, just be prepared to fight your way through the crowds (or show up first thing in the morning).

The offerings do match the clientele: This is less a traditional farmer’s market than it is a bio-conscious-city-dweller’s re-imagination of one:

Everything is carefully presented with all the right props. The “craftspeople” have tribal tattoos, rather than calluses, and you can buy fine wine and overpriced coffee equipment next to demeter-cultivated turnips from the Uckermark.

The old Kreuzberg is driven out

Until now the “old” Kreuzberg, consisting of less well-off immigrant families, outcasts and nonconformists, was still represented by the remaining Aldi branch on the premises. For years, it was a typical Berlin contrast: Hipsters buying hand-picked organic fruit on one side, while the average locals did their family shopping at the discount store.

It won’t be much longer: Markthalle’s management is now shutting down the Aldi store, which held out in its present location for more than forty years. Ecologically correct market hall shoppers, for which mass-produced and frozen dishes have long been an eyesore, will finally be among themselves.

The hall’s management – after pointing out that Aldi doesn’t fit the concept of being “an alternative to the food industry” – remarked that those who need them “will still find plenty of discount stores nearby” (and conveniently out of sight).

The hall’s motto “Good Food for All” will remain - at least for those who can afford €4 for a slice of handmade pizza.