Almost a decade after its planned closing date, Tegel airport may just silently fade away in the COVID-19 emergency.

We always had a special fondness for Berlin’s main airport at Tegel. While we would take low-cost flights out of the former GDR airport at Schönefeld, the original Terminal “A” building had its own kind of nostalgia for those raised in the seventies and eighties. 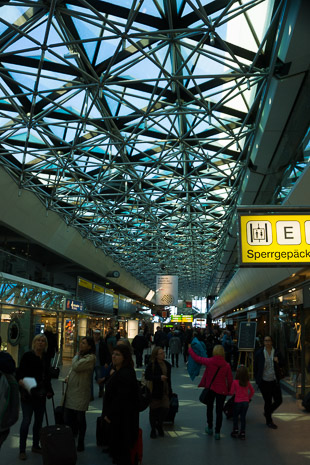 The iconic terminal A in busier times. (Photo: Daniel)

Designed by Gerkan, Marg und Partner, the hexagonal building was opened in 1974 and marked the transformation of Tegel into (West-)Berlin’s most important airport; it still breathes the spirit of that time.

Built for a divided city, the airport was uniquely suited for its mission: Given that virtually all flights out of Tegel were to airports in West Germany, less than one hour long, Terminal “A” was designed get people on the plane as quick as possible. Up until March 2020 you could park your car directly below your gate, go upstairs to a dedicated security check and be on board in 20 minutes – without passing through a shopping mall.

From here we departed to our road trip in the US, our first visit in Japan, to Hong Kong and various business trips. When easyJet took over operations in from Air Berlin, we could also use Tegel for hops to France and Britain (albeit from the “new” Terminal C, which isn’t any more appealing than Schönefeld).

Tegel’s fate was sealed when Berlin’s senate decided to build the new “Berlin-Brandenburg” (BER) airport. Although slated for closure in 2012, Tegel soldiered on due to endless delays with the new airport.

When the COVID crisis hit this year and air traffic collapsed, Tegel was kept open more for political reasons than out of any neccessity: Schönefeld is more than enough to handle all remaining traffic for the moment. Terminal A is already shut down – all remaining flights go through Terminal C now – and it seems unlikely that it’ll ever open again.

Berlin’s airport authority will ask for a “temporary” closure due to economic reasons, and with the COVID crisis estimated to last until early next year it may take a while until demand picks up again.

The new airport is slated to open in October and, after half a dozend botched openings, it looks like they could make it this time. Tegel would no longer be needed when flights come back and the closure be permanent.

This iconic place would have deserved to go out with a proper ceremony instead of silently fading away; but maybe that’s how it is going to be.